“I grew up in an orphanage with only boys.  I always wanted to… 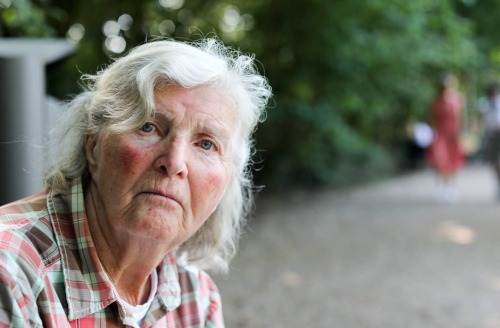 “I grew up in an orphanage with only boys.  I always wanted to learn some type of fighting.  But I got married and had kids, so I just never had the time.  But when I turned forty, and all the kids were finally grown, I decided to learn Judo. There weren’t many women in the class.  A few girls came in, but they never lasted.  They’d get married, have children, and eventually drop out.  But I kept going.  I became a brown belt.   I’d spar against men.  Sometimes new people would wonder what the old lady was doing there, but they learned soon enough.  I only stopped a few months ago.  But I’m still strong.  Feel my arms.  Notice I’m sitting alone right now.  I’m not afraid.  Everyone knows not to mess with me.  They can see in my eyes that I’m not scared.  I may be eighty-six but I could lift you off the ground and throw you over my shoulder right now.”
(Amsterdam, The Netherlands)